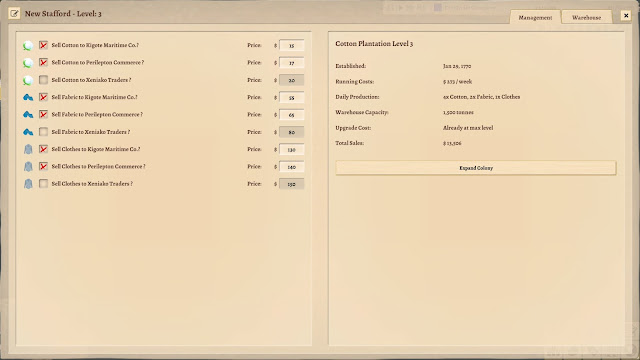 Version 0.6 is almost here and some very exciting things have been taking place lately. Some of the most interesting changes the game has suffered in these past few weeks are: As I promised in a previous post , Winds of Trade now has colonies! Yes, finally your company can use the political and economical leverage to found new settlements in order to exploit natural resources. You can then create your very own supply chains in order to control the market. Choose which of the goods your colony produces you want to sell to your competitors! Several changes to improve the overall user experience. The most important one was switching the font to one that's a lot more readable , especially in small screen sizes. The new font is lovely! New procedurally generated rocks in the ocean. These new obstacles add some variety to the generated worlds and force your ships to take different routes in order to avoid them. This new version rocks! Sorry, I will see myself out
Publicar un comentario
Leer más

The road towards v0.6

Lately I've been quite busy working on Winds of Trade v0.6. This is a major milestone for the development, as it will be the first version of Winds of Trade that will be distributed to many different people in order to get their feedback. So far I had only done that with people close to me. It will also be the first version of the game that will have its economy simulation pretty much complete. If nothing goes awry, it should be ready to be shipped by the end of the month. Some of the most interesting features this version will include are: Production, consumption and price simulation for 20 different commodities, including sugar, cigars, opium, iron, wood and paper. 20 now, but more to come! :) Stock market with companies that produce and consume resources in the game world, so you can help them succeed in order to maximize your profits. It would appear that cigars are a good investment... With enough money and political leverage your trading company can establi
Publicar un comentario
Leer más
Más entradas