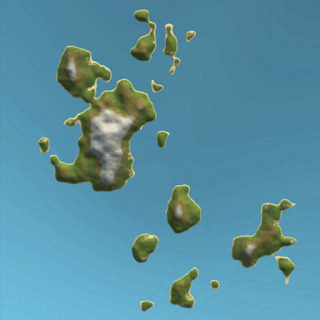 Lately I've been focused on deciding on a set of features I wanted to implement in order to make a 0.3 version of Winds of Trade. I am almost done with them, so I can send this new development release to some friends for testing. These are the latest changes made after the whole "add procedurally generated countries to the game" nightmare: Lots of tweaks to the terrain generation algorithm. Now it's a lot more "island-y", runs faster and crashes less. It's still not perfect, but it's a vast improvement over the previous version. An example map made with the new terrain generation algorithm. Added a basic macroeconomy simulation: countries go through different economic situations (like depression, recession, prosperity and so on) that change the rate at which they manufacture and demand different goods and the overall prices. For example, a country that's going through a depression phase will lower its coffee consumption; or a country tha
Publicar un comentario
Leer más

When I first started developing Winds of Trade, I thought the whole game in terms of cities. You could go with your ships, visiting different ports and doing the usual buy high and sell low stuff. But after a while that felt a bit unrealistic and not too interesting in terms of gameplay, so I decided that every city in the game had to belong to a country. That opened lots of new possibilities, like having your ships recruited by a ruler because his country was going to war with another; having economic cycles that affect all of the cities of a territory; or having some countries ban certain goods, opening the doors to the wonderful world of smuggling. That, of course, brought some new challenges. My main two problems were: how to determine what country each city belongs to and how to determine who owns every pixel of virtual land available in the world. Here you can find the incredibly simple, quick and dirty solutions I used to face those problems. Chapter 1: "Who runs thi
6 comentarios
Leer más
Más entradas